You don't hvae to skip to the bottom. Here's what you need to know:

It combines a decent keyboard and somewhat poor trackpad. The size and convenience of a single cable in a laptop-style form factor makes up the bulk of the value proposition. It is an inexpensive tool perfectly suited for light, occasional use. It is not recommended for extended use.

It's plug and play on Raspberry Pi devices running Raspbian/Raspberry Pi OS. No configuration or extra download or drivers were required.

It's fine. If you are used to mechanical keyboards, this one is quite mushy. It won't be as good as a great laptop keyboard. The finger guides are on the bottom of the f and j keys.

If you rely on the number pad, this one is laptop-style embeded in the middle of the keyboard and activated with a NumLock modifier key. Adesso does make another all-in-one combo with a proper number pad, but that model is obviously much wider.

This review is being written on a MacBookPro, which is the gold-standard in trackpads. The trackpad default is "slow", meaning it takes quite a few swipes to get across the screen. It get's the job done, but the tap to click and the "mouse-wheel-slider" on the right side isn't very reliable. I've mostly been using the physical trackpad buttons on the Adesso.

What's it good for?

Light, occasional usage. Plugging into wall or rack mounted machines. Headless machines. Essentially anything where you won't normally have a keyboard/mouse attached but occasionaly need one for the occasional maintenance task. 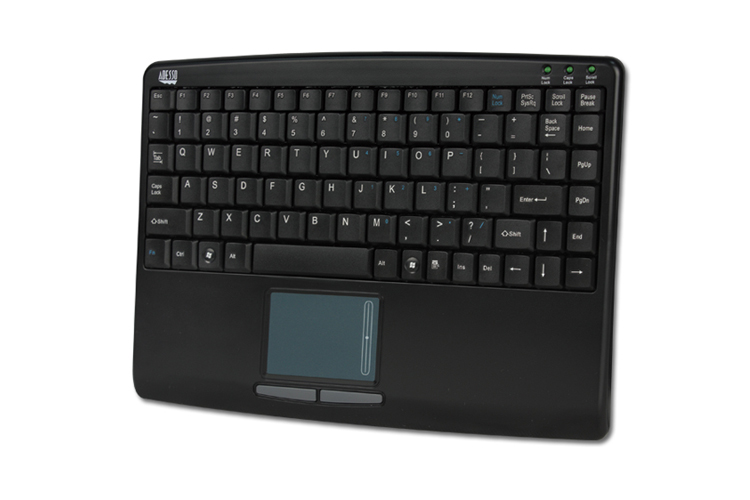 Not shown in the image is the single USB cable, on the back edge, slightly off center (roughely aligned between the F8 and F9 keys)